After five weeks of research, we started work on our prototype, the broadband monitor. 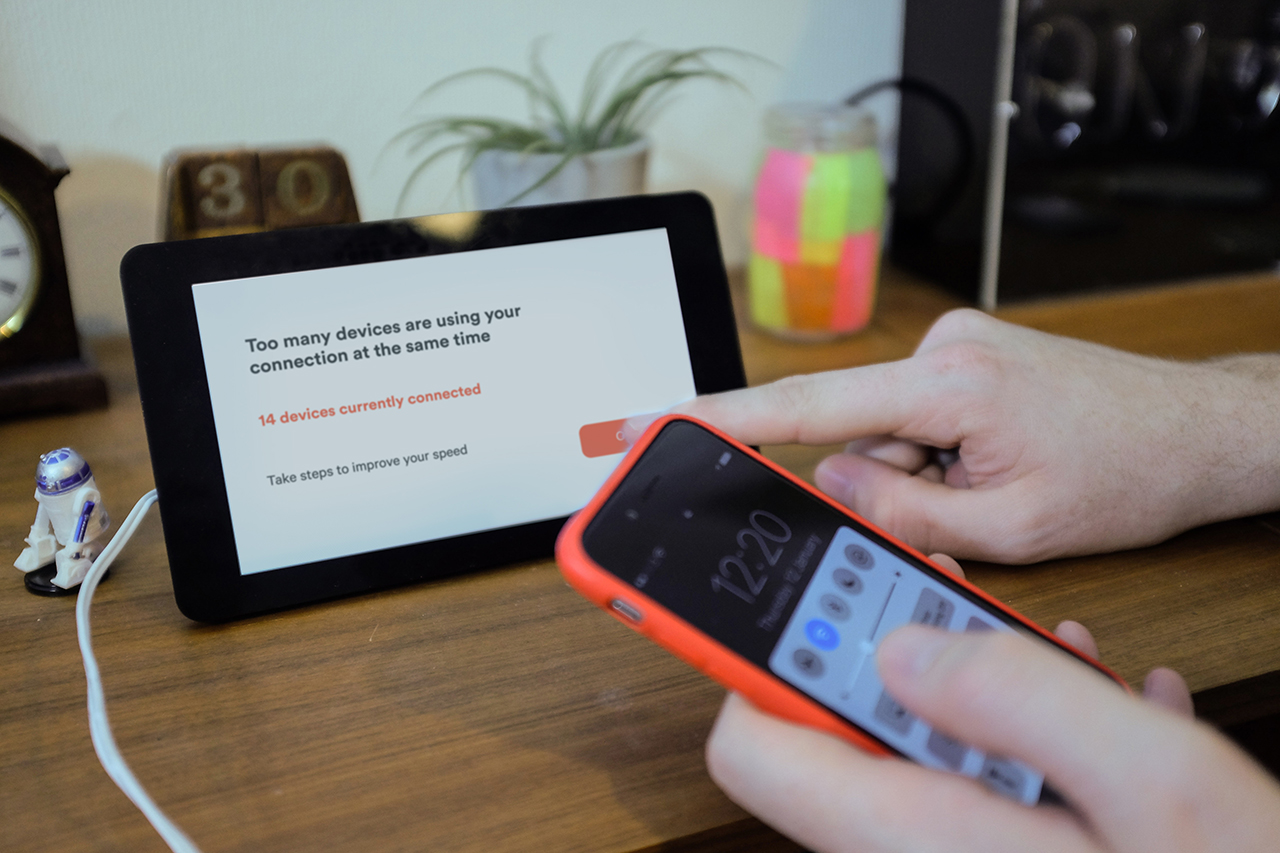 The broadband monitor is a service that gives people headline information about their internet connection.

The prototype tells people about the state of their connection in real time. It's glanceable, designed for the 7" screen CHOICE have been investigating for their home router product.

The interface builds on one of the most important things we found in our research; people only think about their internet connection when it isn’t working.

People we spoke to talked a lot about their frustrations with how their internet connection performs. They also told us the stories they use to explain the quirks and dropped connections they experience on a daily basis. These stories include things that we might think of as related to security, network hygiene or network load. But those aren't phrases many people use. Instead the people we spoke to ask themselves 'Why can't I get this film to stream?' before giving an answer based on a hunch or a half-remembered story.

This persuaded us to develop a different kind of interface than we'd build for The Log. It focuses on information, rather than devices, to draw out actionable, useful advice. We tested three user journeys to see how the format works across different kinds of performance data.

The prototype that met the most commonly identified need showed people their current broadband performance. 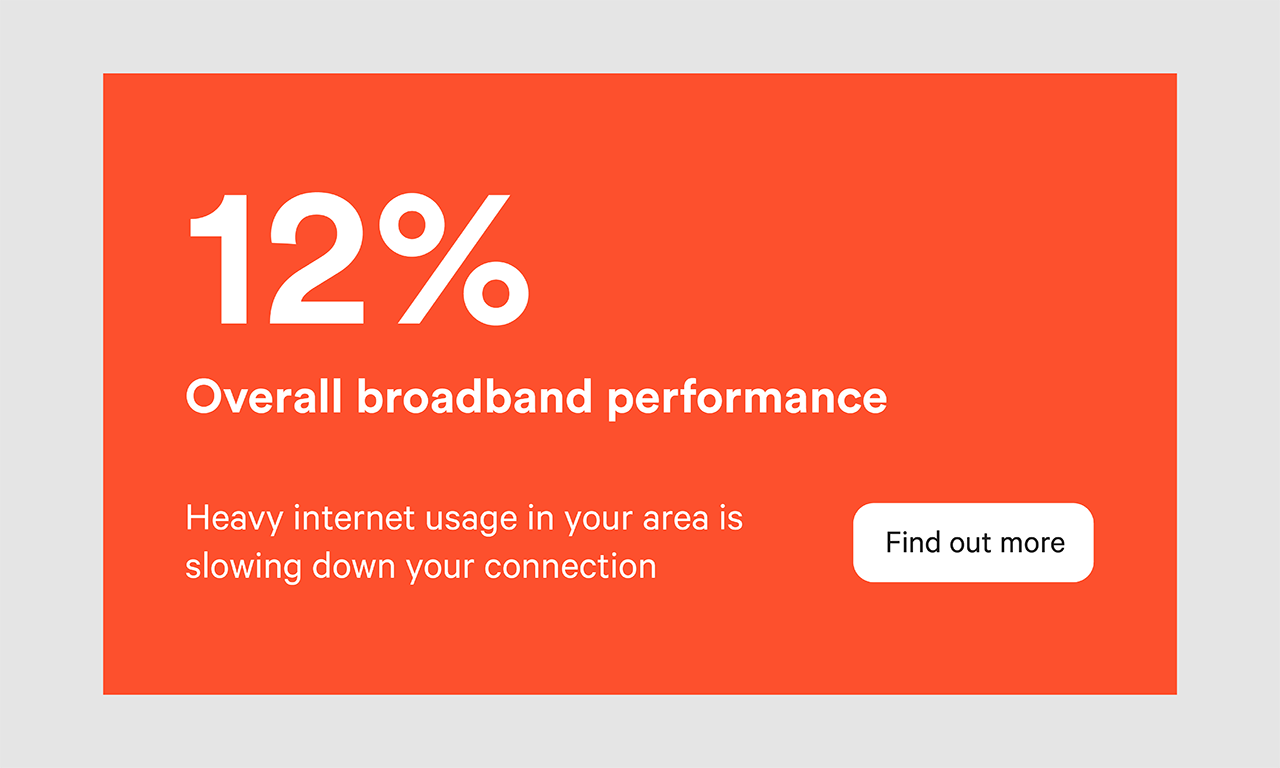 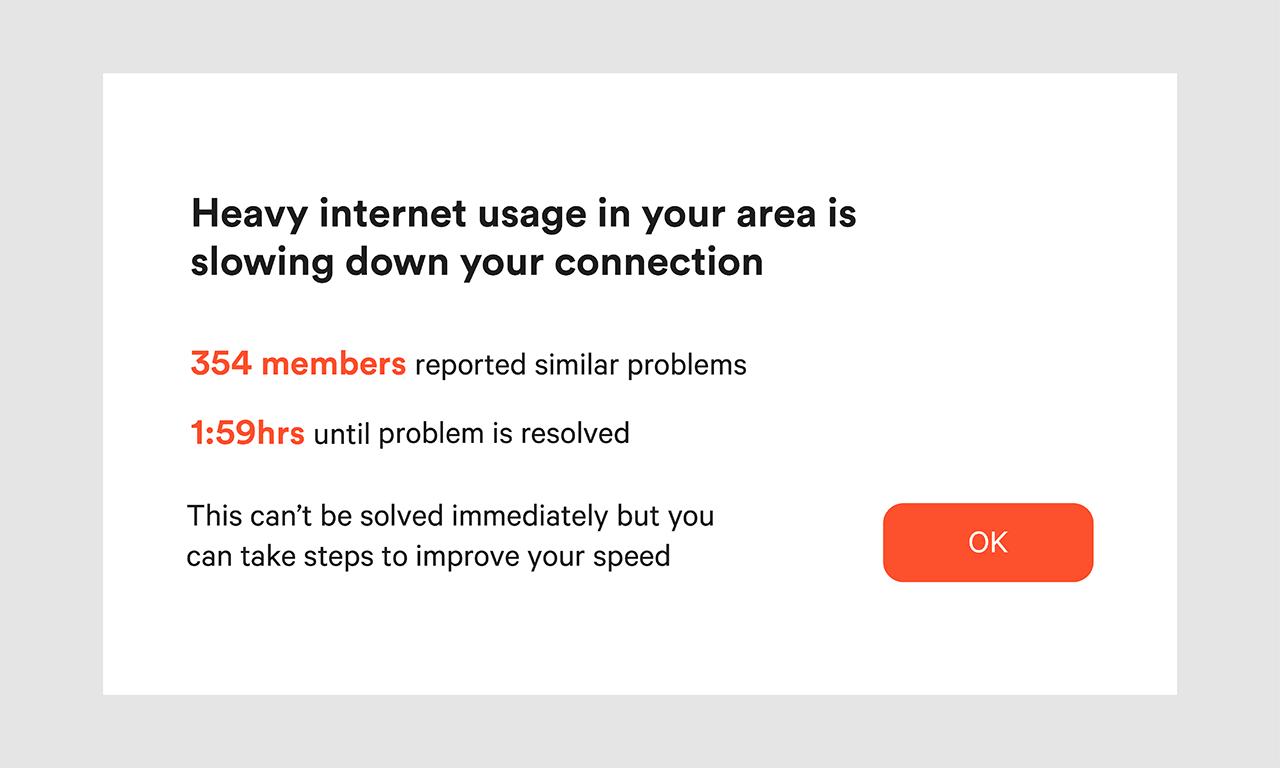 To show a number that represents how an internet connection is performing, we compare the upload and download speed of a connection with the speed the provider advertises. We can get that data by measuring how long it takes for the router to download a file of a fixed size.

In testing this resonated very strongly with people who have recurring problems. The interface gives people the option of seeing more information about the problem, and advice about who to contact for more information.

We also tested screens showing the number of devices on the network and how heavily those devices are using it. 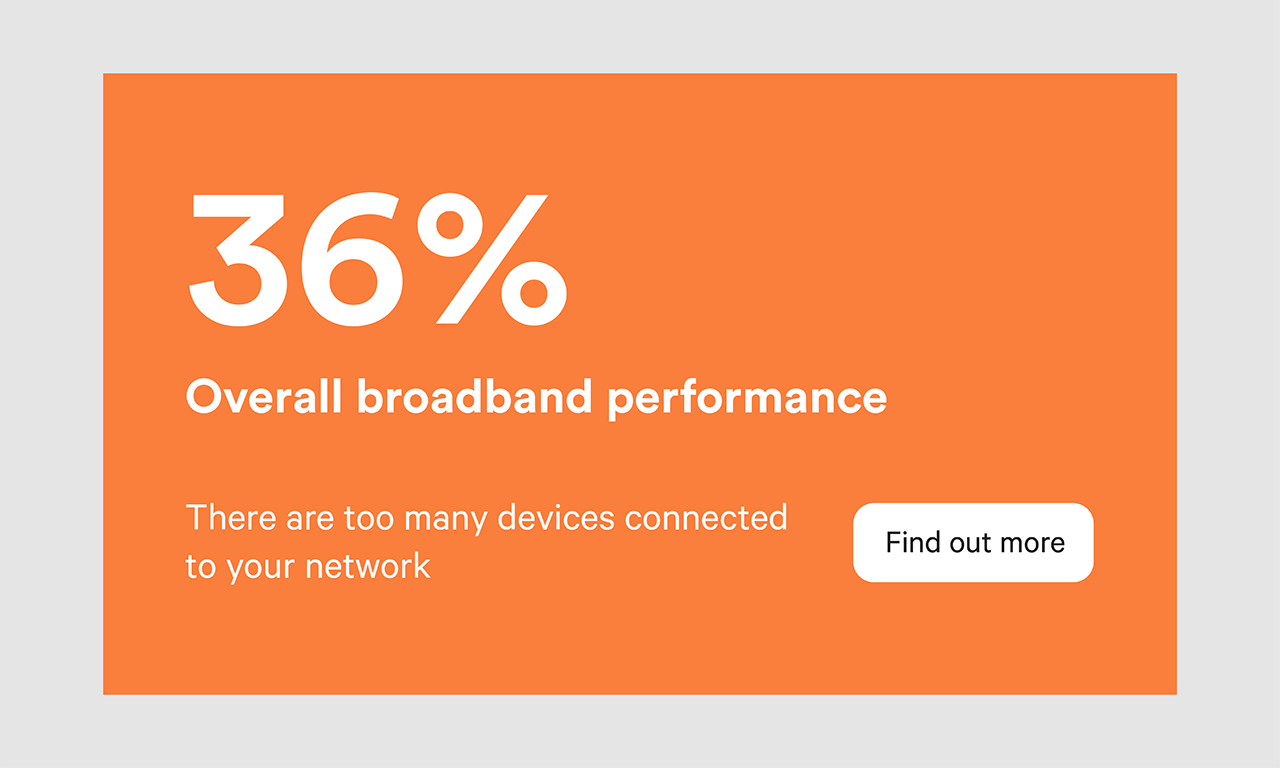 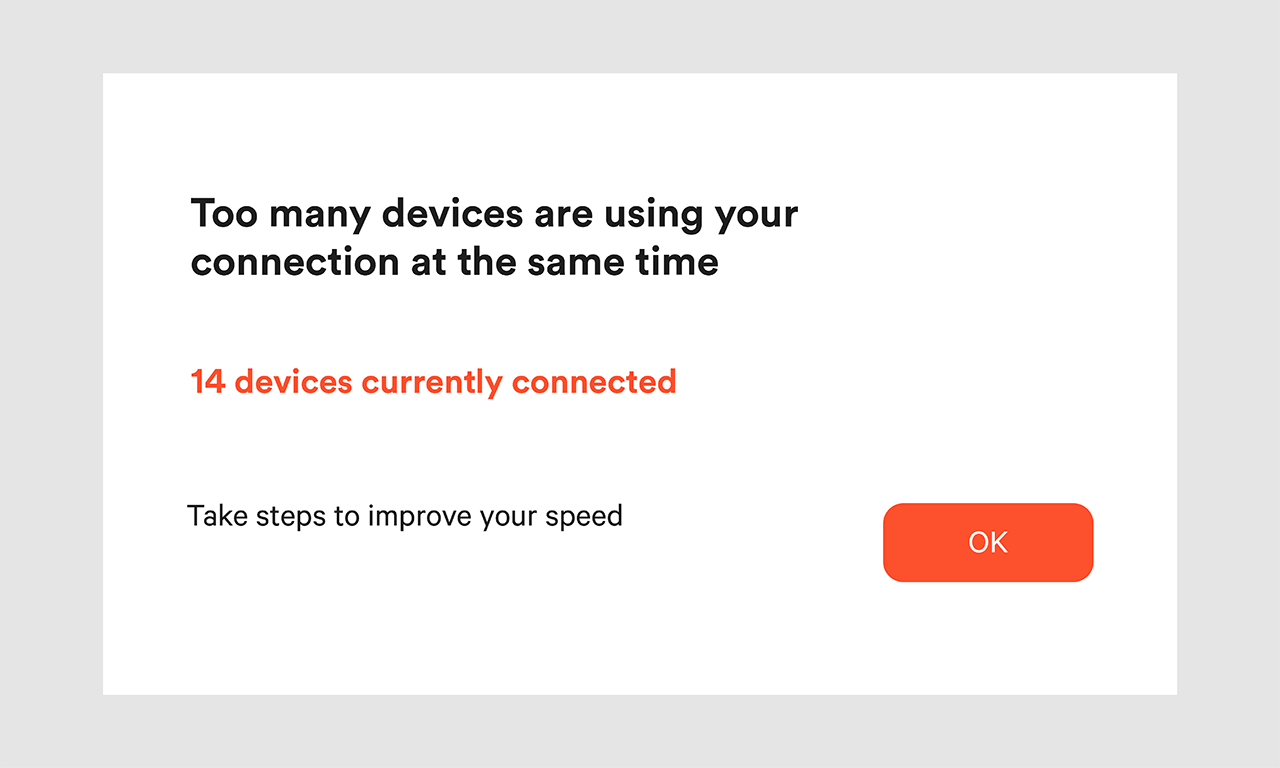 Here we're comparing the maximum theoretical capacity of a wireless networking connection to the rate that devices on the network are using it. The aim is to help people understand how the quality of an internet connection can fluctuate depending on how it's being used.

The interface prompts people to remove devices from the Wi-Fi in order to manage their network connection.

The third user journey we explored showed what would happen if someone wanted to remove a device from the network. This was about helping people understand if anyone outside their home is using the Wi-Fi. 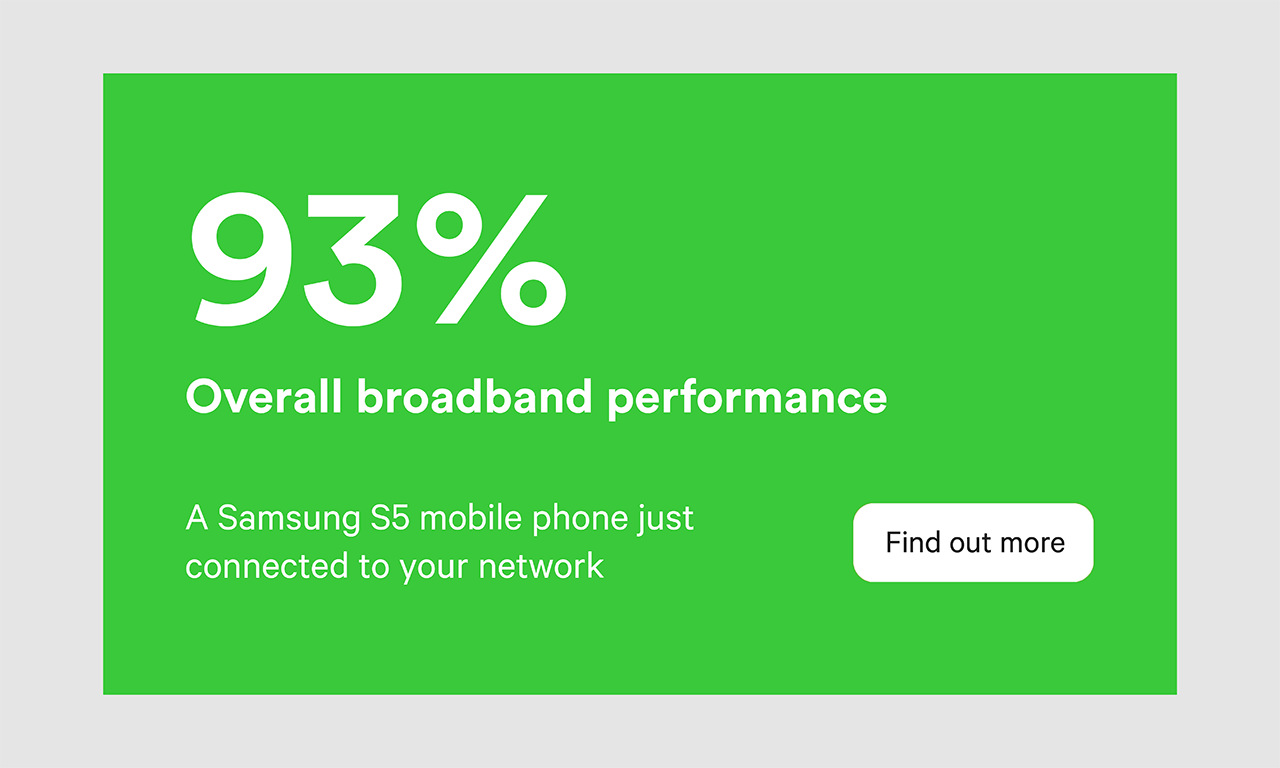 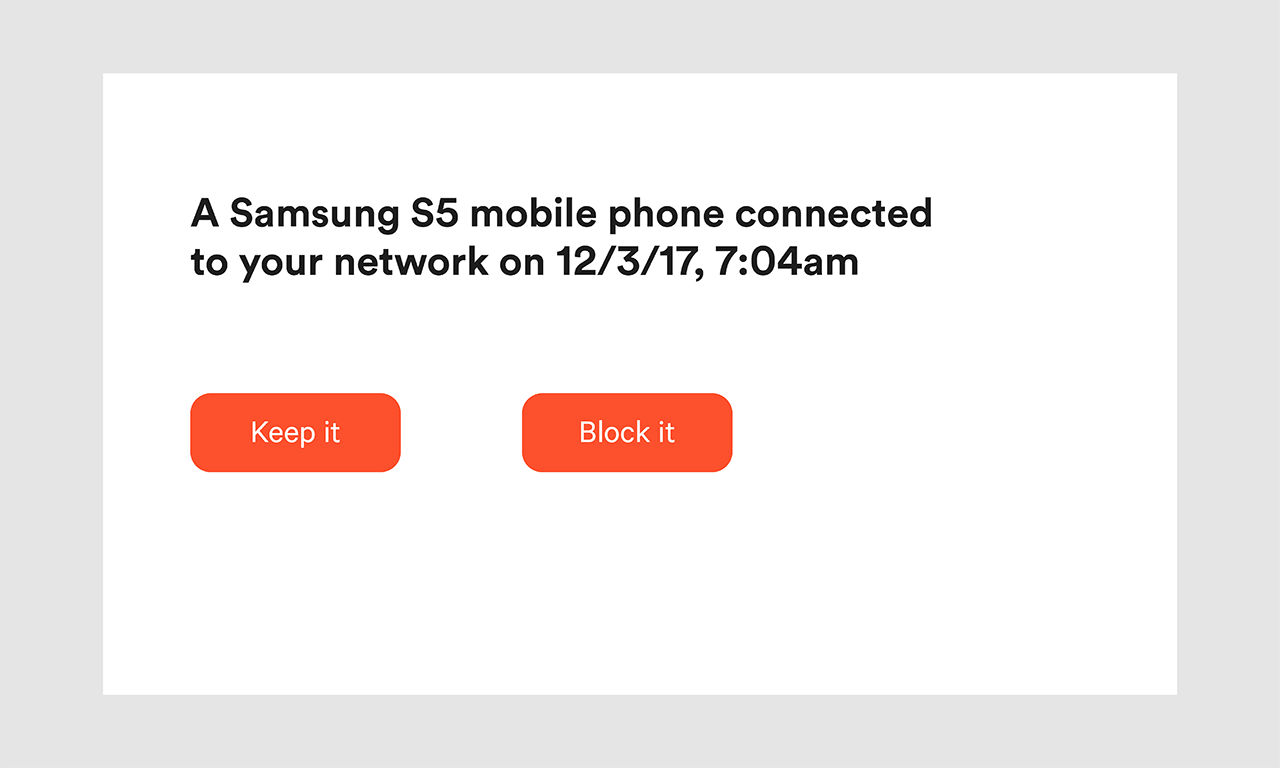 Every device that can connect to a network is represented by a MAC address. The service we designed uses these addresses to block specific devices from obtaining a local IP address. This means that the device won't be able to connect to the network.

Introducing ideas around network hygiene in the context of internet performance proved really useful. It helped people think about taking control of their network, without making them anxious about remembering new passwords.

In The Log we thought the main way people would look at information about device security was on a device-by-device basis. But as we tested that kind of interface in this project, we found that focusing too narrowly on issues like these alienated people.

Instead, we framed them as reasons the internet connection might not be working well. That proved extremely effective.

People felt more comfortable doing something like replacing a default password when it came in the context of connection speed. It mitigated some of their anxiety, and gave them more motivation to think about why they might change settings like this.

We've also thought carefully about the kind of useful prompts people need to do something about improving their internet connection. These ‘next steps’ would be based on datasets of things like manufacturer helplines, known issues and security vulnerabilities.

Each of these datasets is an extremely powerful resource for people building consumer friendly technology. They're the kind of thing advocacy organisations are extremely well-positioned to make.

Finally, the service shows information about the internet connection for people in the local area. It implies a pool of broadband monitors sharing data (with the owner's permission) and processing it.

By exploring data like this through the lens of consumer advocacy, CHOICE can build a useful dataset for their work and make it useful for people who use the broadband monitor.